Last September, Greece’s newly elected Prime Minister Kyriakos Mitsotakis, speaking at the UN General Assembly on Climate Change announced his government’s decision to eliminate all use of coal from the country’s energy system by 2028.

The announcement, which surprised everyone, even high-ranking members of his own New Democracy party, was greeted with cries of relief and jubilation by the green lobby which has long advocated the total elimination of lignite, an indigenous  form of poor calorific value coal.

But it also came with great consternation and anxiety from the local communities in West Macedonia and Megalopolis, where lignite-fired power stations are located.

According to sources close to labour unions in northern Greece, the closure of all lignite facilities will lead to massive unemployment which is likely to exceed 25,000 people over the next three years.

“Greece’s decision to be proactive in decarbonising power generation did not come out of the blue, it was rather the  result of a long process over the last three to four years whereby lignite use for power generation has gradually become marginalised in economic terms”, said a highly placed source in Greece’s Ministry of Environment and Energy.

Since the start of this year, lignite power is used to cover only a fraction of the total generation mix.

Most characteristically, in the second week of May, power generated in Greece did not use lignite at all.

As reported by the Institute of Energy for SE Europe (IENE) in its Electricity Market Analysis Bulletin,  ”the Public Power Corporation (PPC/DEH), Greece’s incumbent electricity company, for the first time ever did not use lignite-fired plants to provide the local pool system with electricity for an entire week”.

The IENE Bulletin pointed out, “most notably, PPC’s lignite-fired generating units, having operated at a particularly high and non-competitive production cost, were thrown out of the dispatching schedule during Week 19.” 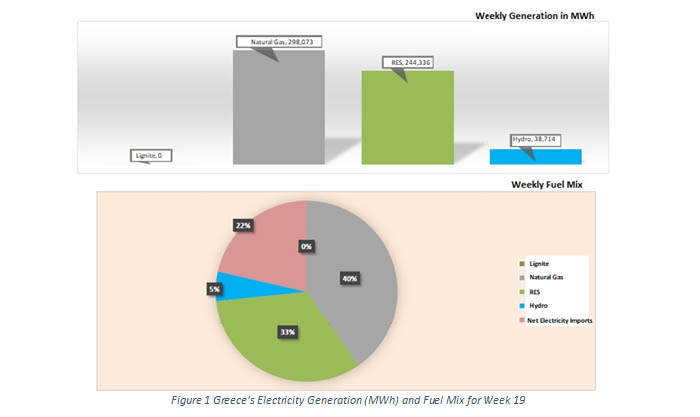 However, in spite of a balanced energy mix and sizable contribution from local RES and hydroelectric power, Greece’s average wholesale electricity prices remained some of the most expensive in Europe last week when the average price reached €29.27 per MWh, with only Poland recording an even higher price at €38.27 per MWh”. 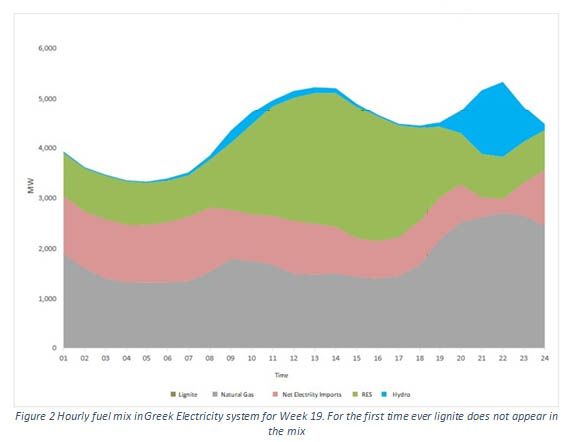 High emission prices in addition to PPC’s substantial operational and maintenance costs, for both power units and lignite mines, have made coal-generated electricity in Greece an expensive proposition.

With PPC currently operating 14 lignite-fired stations, along with several mines, with total installed capacity of some 4.0 GW, the financial blow stemming from their expensive operational maintenance, and almost zero contribution to local electricity production, is really huge and constitute a continued drain on the corporation’s resources.

Consequently, PPC is speeding up its decommissioning programme aiming to have fully removed or mothballed its entire lignite power station fleet by 2023 save one major station, the Ptolemaida V, currently under construction and slated to come on stream next year, which if necessary could be converted to operate with biomass.

However, the government’s determination to take swift action to quickly decarbonise its power generation is not a one-sided harsh and ill-conceived move as its was portrayed by several energy market players and labour organisations.

The decision is in line with the EU’s clearly stated policy and well defined targets agreed by member countries, including Greece, to lower greenhouse gas emissions by 40% and at the same time increase the participation of renewable energy sources (RES) to 32% and energy efficiency by 32.5%, and all that by 2030.

Earlier this year, Greece along with other member countries, submitted its revised National Energy and Climate Plan (NECP) where it aims for a RES contribution of 61% to 65% in its power generation mix and for 35% input in its final energy consumption by the end of this decade.

These are indeed highly ambitious targets which correspond to some 8.0 to 10.0 GW of new RES-installed capacity by the end of this decade.

In view of the fact that all investments will have to be made by private concerns, the government now faces the Herculean task of having to prepare an imaginative legal and administrative framework and provide adequate incentives to attract much needed investment.

According to senior officials, the government appears confident that over the next five years or so its “green policies” will work out and attract sufficient interest, leveraging enough funds to create employment opportunities so as to replace the jobs which will be lost due to the decarbonisation plans.

Today, some 8,000 people are employed in PPC’s lignite operations with at least 7,000 of them becoming redundant once power generation and lignite mining ceases in 2024.

A small number of employees will be retained to operate the Ptolemais V lignite power station, a high efficiency unit of some 680 MW, currently under construction, which is slated to come on stream next year.

However, the impact in terms of job losses in the lignite regions is estimated to be much higher since each job in lignite operations sustains at least 1.5 extra jobs in the vicinity.

With some 15,000 to 18,000 jobs being lost in these regions, which already suffer from a high unemployment rate, the social impact will be devastating, to say the least.

Most economic policy makers and labour market experts who were interviewed for this article expressed deep pessimism over the government’s ability and plans to attract sufficient investments in the two major lignite producing areas to create alternative job opportunities.

It remains to be seen if and how the government will proceed in resuscitating business activity in what looks likely to become yet another economically depressed region.

Lack of progress on missing ‘cruel’

Turkey is behind mass irregular migration to Cyprus, said Interior

Crypto market cap up 35% in January

The crypto market cap jumped by 35% in January and

Three researchers at Cyprus universities are among 321 projects that

Some 92 Greek and Turkish Cypriot entrepreneurs have entered the