The Belt and Road Initiative, China’s ambitious plan to build an infrastructure highway spanning from Beijing to Brussels, is commonly perceived as a transport artery involving land and sea routes that allow a seamless global supply of Chinese goods and influence in and out of Europe.

What is often overlooked is the third branch of the BRI trident – the energy corridor.

China is steadily building control over electricity and natural gas grids, gradually increasing its influence by selling energy as a commodity that could someday allow for all these resources to be reversed to power up China’s rapidly growing economy.

The second-largest economy in the world plans to become the leading seller of energy, by creating the first truly global electricity grid.

Over the years, it has been redistributing funds, piled up from acquiring US Treasuries and other capital assets, to buy debt issued by peripheral and third world economies, often in a debt-for-assets swap.

This ‘debt diplomacy’ is, in turn, re-injected in the form of “foreign direct investments”, duping many governments to believing that China is their big saviour. In a way, it is.

And where its economic aspirations are doubted, China has resorted to harsh diplomatic words, as with Sweden, home of Volvo cars (now owned by Chinese carmaker Geely), where Beijing’s ambassador sent a chill through the country when suggesting the Scandinavians would need to back- off from human rights criticism of ‘heavyweight boxer’ China.

China is wielding power by flashing large wads of cash in the face of desperate governments and the promise of development projects, as was the case of Djibouti that dumped Dubai’s DP World as the operator of the most critical port on the Horn of Africa.

It subsequently handed control of the port to China Merchant, with a coincidental investment of $580 mln to build a base for the People’s Liberation Army Navy (PLAN), from where it can oversee and secure maritime traffic to and from China.

Historians could also argue that China’s long-term strategy is to build up defence assets that will push the threat of foreign powers of the West, even Japan, as far away from its coastline as possible.

Using “national interests” as its excuse to switch from the Dubai operator to the Chinese, is identical to the playbook used by Greece to abandon a fully-funded EU electricity interconnector project between Israel, Cyprus, Crete and Attica, in favour of building the Attica-Crete link on its own as a ‘national’ project.

Ironically, the deal, to be built by the Chinese-controlled ADMIE transmission system operator (TSO), was used by the then-opposition New Democracy to lambast the outgoing Syriza government’s “sell-out” to the Chinese, now in power, it has turned to embrace it as its own.

In return for the loyalty of the Mitsotakis government, China’s President Xi Jinping visited Athens in November bearing gifts that included 16 key areas of cooperation.

The investment by the Chinese shipping and ports giant aims to boost operations, including mandatory investments of €300 mln by 2022 which, once concluded, will allow Cosco to acquire an additional 16% stake in the port, thanks to a loan of €140 mln from the European Investment Bank.

China is also intent on taking full control of the Greek electricity TSO, with power transmission giant State Grid Corp hoping to double its stake of 24% in ADMIE. Already, two institutional state-owned Chinese banks – Bank of China and the Industrial and Commercial Bank of China (ICBC) – gave ADMIE an unsecured and low-interest five-year loan for €200 mln in March 2018, due to the “clear example of the benefits resulting from the presence of State Grid Corporation of China as a strategic investor in ADMIE”.

If ADMIE defaults on the loan, then the banks will implement the debt-for-assets swap policy, automatically giving State Grid total control over ADMIE by 2023.

State Grid is the largest utility company in the world, and as of July 2019, the world’s fifth-largest company overall by revenue, ahead of Saudi Aramco and just behind behemoths Walmart and Royal Dutch Shell.

With the ADMIE board now under its direct control, including the deputy CEO and two others from State Grid, Chinese subsidiary Nari Group is vying to build the high-voltage direct current (HVDC) converter stations at the two ends of the Attica-Crete link, part of the €1 bln deal for the subsea cable link.

This would cast doubt over European giant Siemens having fair treatment as a contender for the project.

This means that ultimately, China’s State Grid will want to have a say in how the rest of the Israel-Cyprus-Crete cable will be built by setting its own ground rules for the converter station in Crete and issues of ‘interoperability’ with the rest of the EU-approved EuroAsia Interconnector, regardless of who builds it.

To ensure it can wield power within ADMIE, State Grid has pushed for the recruitment of more staff, with the TSO embarking on a hiring spree of 53 senior executives, new department heads and others.

A trade union-appointed board member accused the management this month of favouritism by sidelining “at least 10” qualified managers to be replaced by less qualified, yet loyal new staff.

This confirms a heated debate in the Hellenic Parliament on March 7, 2019, when former New Democracy parliamentary spokesman and present-day Deputy Minister for Common Agricultural Policy Costas Skrekas, accused the then-Energy Minister Giorgos Stathakis of blind-siding the assembly to hire 30 staff for ADMIE through the back door.

But Chinese influence does not end there.

The only stumbling block, to date, has been State Grid’s unsuccessful attempt to take control of Germany’s third-biggest electricity transmission grid 50Hertz.

Instead, it seems to have put the cash arsenal of €1 bln for that bid to good use in other markets.

Beyond increasing its stake in Greece’s ADMIE, State Grid declared its intention during Xi’s visit to Athens that it wants a 20% stake in the Attica-Crete sub-operator Ariadne (presently a 100% subsidiary of ADMIE).

This would be identical to another 20% stake that is destined to be given to Italy’s CDP Reti Holding Joint Venture, which is also 35% directly controlled by State Grid.

SNAM is also a 20% shareholder in the Trans Adriatic Pipeline, the company selling Azeri natural gas to Europe.

Furthermore, CDP Reti Holding has a near-30% control in the Italian electricity TSO Terna, which enjoys a joint venture partnership with ADMIE that owns the 500MW Italy-Greece Interconnector built in 2001. 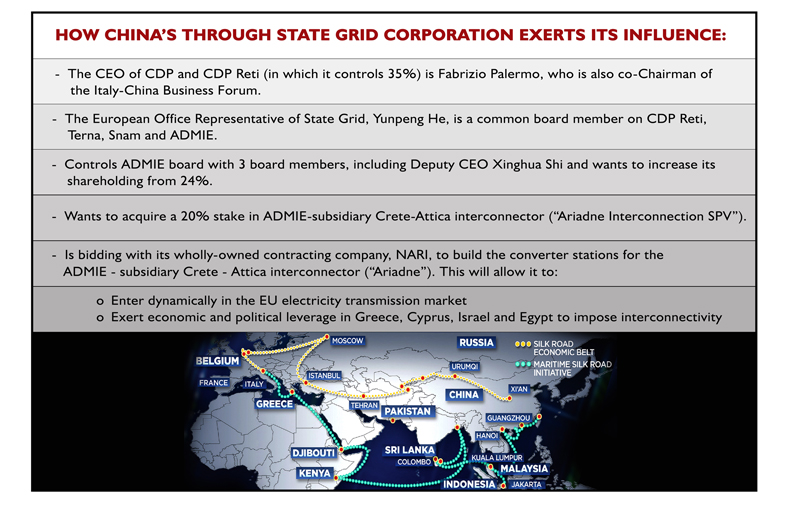 In addition to Greece, State Grid controls electricity transmission facilities in Australia, Brazil, Portugal and the Philippines, with the latter’s national grid almost switched-off in a territorial standoff in the South China Sea last November.

The Atlantic Council, the Washington-based think tank promoting US-Europe relations, estimates that energy investments in BRI countries would add up to $27 trln by 2050, with $7 trln alone going to power grid construction.

According to the Global Energy Interconnection Development and Cooperation Organisation (GEIDCO), an advisory body set up by State Grid in 2016, the strategic plan is to build out and then connect the power grids of Eurasia and beyond, which is key to BRI’s energy component and “a personal project of Xi Jinping.”

This potential to grant China leverage over such a large economic swath “is a stark example of how the U.S. retreat from the international order is surrendering American power and influence in the 21st century,” the Atlantic Council said.

In the first phase up to 2020, State Grid would promote the interconnection of national grids in various countries, including technical research, building smart grids, and accelerating the deployment of renewables.

Between 2020-2030, countries within a continent would connect their grids and develop “clean energy bases.”

In the third phase from 2030-2050, transcontinental grids would be linked via ultra-high voltage (UHV) “Afro-Eurasia Backbone Grids” comprised of 67 key projects along 126,000 kilometres with a transmission capacity of 410 gigawatts (GW).

This has prompted U.S. Secretary of State Mike Pompeo to recently warn America’s governors to be wary of China, which he said was targeting individual U.S. states in a strategic effort to expand its economic and political influence.

“The lesson is [that] the competition with China is not just a federal issue,” Pompeo said in addressing the National Governors Association meeting in Washington.

Pompeo urged the governors to be wary of Chinese investment and influence, including through contacts with Chinese diplomats, students and organisations.

He conveyed similar warnings on a recent five-nation tour of Europe and Central Asia. During a stop in London, he declared the Chinese Communist Party “the central threat of our times.”

The writer is an analyst on regional and geopolitical issues

Ankara wants the East Med to become a ‘Turkish lake’

While deposit rates are at rock bottom with some banks

A frequent French naval presence in the Eastern Mediterranean, especially

Ankara wants the East Med to become a ‘Turkish lake’

Nicosia is doing its best to have a Cyprus-Greece passenger

Cyprus and Norway will sign a Memorandum of Understanding (MoU)