Revenues from Cyprus ship-management companies, by far the biggest money earner for the maritime cluster, reached an all-time high of €581 mln in the second half of 2019, up €58 mln from the first half, to reach €1.104 bln.

Central Bank of Cyprus data also suggests some changes in revenue by country of billing or by category of ship management, with an underlying stable trend of increasing income.

Shipping Deputy Minister Natasa Pilides said it was a “record” turnover and saw a 7% increase from 2017 when revenue from ship management amounted to €1.034 bln.

The rise is generally attributed to Cyprus’ regime of competitive management fees, as well as the low-tax system based on the tonnage of a vessel, that was renewed by parliament for a further 10 years last week.

The central bank’s Ship Management Survey also shows that the sector’s contribution to the economy’s gross domestic product (GDP) climbed from a steady 4.9% recorded from early 2018 to 5.2% in the second half of 2019.

This was fractionally below the 5.3% seen in 2015 when shipping was the main driving force in the economy’s recovery following the banking collapse and financial meltdown, obliging Cyprus to seek a €10 bln bailout from the ‘Troika’ of the European Union, European Central Bank and the IMF.

The shipping cluster is conservatively estimated to be worth 7.5% of GDP through revenues from ship management, ship ownership and other services, including legal and audit, training and telecommunications.

The Cyprus Shipping Chamber, the umbrella organisation that accounts for the majority of maritime companies, said shipping’s contribution to the economy demonstrates its robustness and the tangible prospects for its further development.

“The economic contribution of the local shipping industry reaches such high levels in only a few other maritime nations, so it is important to receive the appropriate financial and operational support, to deal with the effects of this pandemic crisis, keeping world trade and maritime transport moving,” the CSC said in an announcement.

The central bank also warned that the 2H2019 survey was for the period between July and December 2019, which preceded the outbreak of the coronavirus pandemic.

“Consequently, it does not contain any information concerning the impact of the pandemic COVID-19 on the ship management industry. We reserve this analysis for future editions of the report,” the central bank report said.

In its general remarks, the survey noted the shipping sector faced several challenges in the second half of 2019, that derived mainly from changes in environmental regulations, including the reduction in the use of fossil fuels, with an impact on the total value of seaborne trade associated with oil and liquefied natural gas and a possible reduction in the values, profitability and fleet size associated with oil tankers.

“In contrast, bulk carriers and container ships are more robust to these changes, since they can also be used for transferring substitute commodities,” the survey said.

Historically, consumer spending and increasing demand in the US have exerted considerable influence on seaborne trade, especially during periods of trade liberalisation and lower tariffs. Possible negative developments in the US economy, like for example a slowing down of manufacturing growth and a continuation of the tariff war with China, would exert pressure on shipping markets.

As regards Cyprus ship management revenues by country of payment, the central bank survey said there was a decline in Germany’s contribution, from 48% in 2019H1 to 45% in 2019H2, with a considerable increase in the revenue share from Switzerland, from 3% of the total revenues in 2019H1 to 10% in 2019H2. 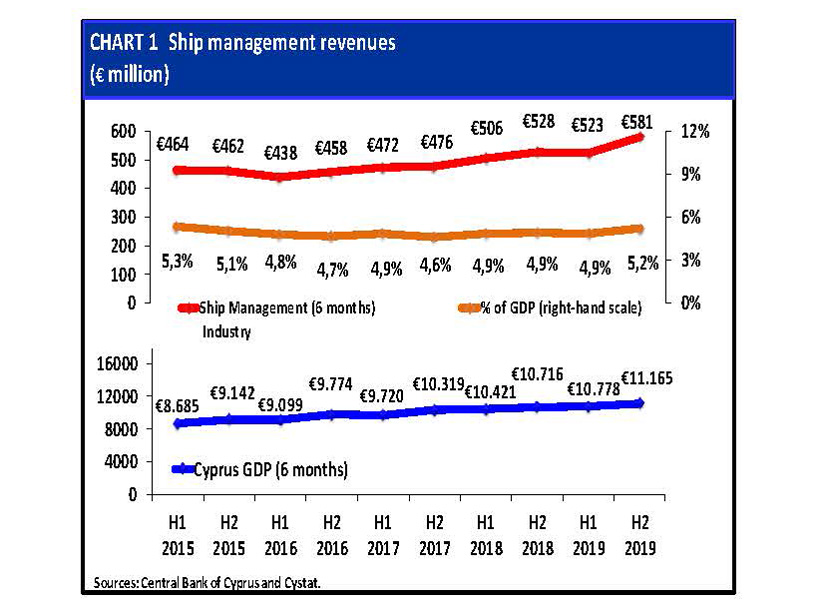 As regards water transport activities (e.g. towing or tugboats and cruises) including the transport of passengers or freight over water, the survey shows a strong seasonality pattern and a slightly increasing trend, which suggests small gradual improvements in the annual values of the sector.

Core ship management services (crew, technical and full management operations) accounted for 79% of the industry’s revenues, down from 83% in the first half of 2019.

Germany remains the most important source, with a contribution of 51%, followed by Switzerland with 13%.

The central bank survey said the choice of flag is a strategic decision in ship owning operations, particularly in the case of open registries that provide ship owners with considerable advantages in terms of the legal and regulatory framework surrounding ship operations.

The share of revenues collected from the provision of ship management services to ships carrying the Cyprus flag, decreased sharply from 46% of total revenues in 2019H1 to 3% in 2019H2, attributed to a significant change in the structure of revenues in 2018, suggesting a return to the flag contributions recorded in 2018H1.

As regards fleet size, companies managing between 1 and 4 vessels accounted for 46% of ship management companies but generated only 1% of the industry’s revenues.

Companies managing 5 to 20 ships accounted for 25% of ship management companies and generated 14% of the industry’s revenues.

Similar to previous periods, a large number of companies maintain business links with ship owners in Germany (31%), despite a reduction from 37% in 2019H1.

With the exception of Malta (26%) and Greece (17%), the level of participation in all other countries remains below the 15% threshold.

“Strategically, the industry should aim to increase its network of operations to more countries that are traditionally linked with a sizeable maritime transport industry, like for example Singapore, Switzerland, Denmark and Russia,” the Ship Management Survey suggested.

Expenses associated with operations decreased to €427 mln in 2019H2, which when combined with the increase in revenues, suggests a potential increase in the profitability of the industry during the second half of 2019.

Historically, the industry exhibits a relatively stable structure of expenses with the majority concerning crew expenses, which accounted for 64% of the total.

Most of these payments were to non-EU seafarers (46%), while administration costs accounted for 11% and ship management (e.g. spare parts, lubricants, dry-docking, etc.) for 25% of total expenses.

The central bank survey said many industry experts expect that the new emission regulations will force ship owning companies to scrap several of their older vessels and gradually replace them with state-of-the-art ships that are designed to comply with the new standards.

“Possible additional changes and expenses concern the installation of exhaust scrubbers and the switch to low-sulphur fuels that should be expected to increase the cost of fuels to ship owners significantly. These developments can also introduce significant volatility in chartering rates, particularly for oil tankers.”

Another source for increasing ship management costs could be the extensive use of “slow-steaming” by ship owners, implemented by ocean-going vessels, like tankers and bulk carriers, with the purpose of cutting emissions and therefore, reducing greenhouse gas emissions.

COVID19: Time for a Green reboot

COVID19: Released from lockdown but only on parole

When the government issued a tender for the supply of

The Auditor-General, the watchdog keeping public finances in check, was

COVID19: Time for a Green reboot

Coronavirus and shutting down businesses as a result of the

When the government issued a tender for the supply of

The Auditor-General, the watchdog keeping public finances in check, was