A sense of optimism over global central banks and governments acting with a co-ordinated policy response has revived appetite for riskier assets.

Shares in Asia pushed higher on Tuesday following the overnight rally on Wall Street thanks to stimulus hopes, and this positivity is likely to roll-over into European markets ahead of a conference call Tuesday midday by G7 finance ministers.

Investors remain hopeful that G7 countries will join hands to battle the COVID-19 outbreak by enforcing a wave of fiscal measures. However, questions are still being raised as to whether central banks have enough ammunition in their policy toolkits to counter the negative impacts of the outbreak. Let’s not forget the coronavirus is a health crisis that causes major supply-side shocks, so, looser monetary policy may have minimal impact in solving the matter at hand.

The mighty Dollar has not been so mighty over the past few days, amid speculation around the Federal Reserve cutting interest rates as soon as its meeting on March 18.

While the Greenback is still considered as a safe-haven asset, investors may be coming to terms with the fact that the US economy is not bullet proof from the virus outbreak and this presents negative risks going forward. Signs of the outbreak impacting economic growth in the States may question the Dollar’s safe-haven status and fuel speculation around the Fed cutting interest rates further, beyond March.

Rocky path ahead for Sterling

After three years of dramatic and chaotic negotiations on the UK’s exit from the European Union, post-Brexit trade talks officially kicked off on Monday. 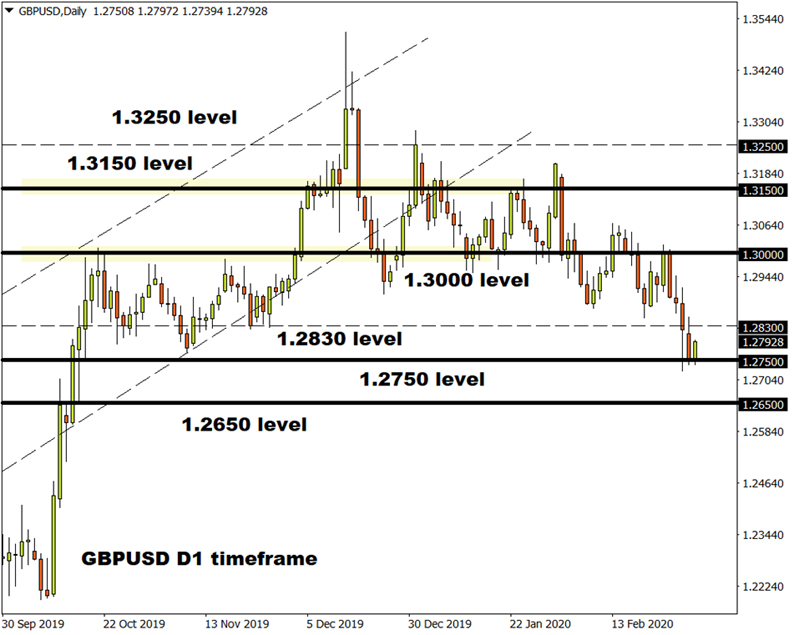 It looks like both sides have entered the talks adopting a hard-line stance, with Boris Johnson threatening to walk away if negotiations fail to progress by June. Pound sensitivity to Brexit headlines is set to intensify this week and for the rest of the first quarter, as investors evaluate whether a hard Brexit will become reality by the end of 2020.

Focusing on the technical picture, GBPUSD is under pressure on the daily charts. A break below 1.2750 may inspire a decline towards 1.2650. Alternatively, an intraday break above 1.2830 could trigger a move towards 1.3000.

Gold regained some of its lustre on Tuesday, rising roughly 0.5% after experiencing its worst single-day decline since 2013, last Friday. 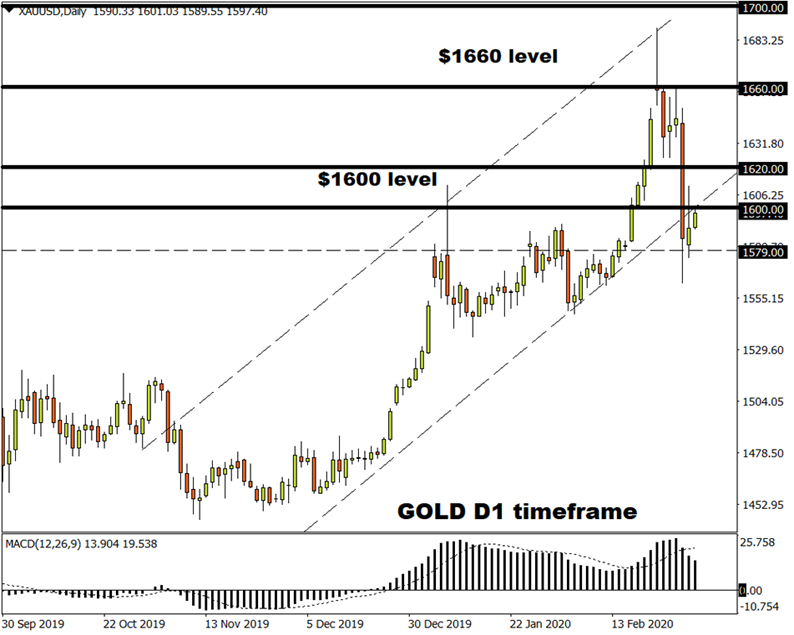 Although the technical picture suggests that Gold could extend losses, the fundamentals remain in favour of the bulls. Concerns over slowing global growth remain rife amid the coronavirus outbreak, especially after the Organisation for Economic Co-operation and Development (OECD) downgraded its 2020 global growth forecast from 2.9% to 2.4%. The general unease and speculation around loose monetary policy should support appetite for Gold, especially amid the potential for a weaker dollar.

Focusing on the technical picture, Gold is under pressure on the daily charts with prices trading around $1598 early Tuesday. Sustained weakness below $1600 may encourage a decline back towards $1579 in the near term. Alternatively, a break above $1600 could open the doors towards $1620.

Truss ‘War of Independence’ over BoE will spook markets

Inflation will remain above 7% over next 18 months – survey