Hollywood director Dimitri Logothetis is set to start shooting his second film “Man of War” in Cyprus from April with another five films lined up, his production company said on Thursday.

Logothetis was behind the production of Jiu Jitsu, a Kung Fu film shot entirely on the island last year – under the government incentive scheme – starring Nicolas Cage.

Following the successful completion of “Jiu Jitsu”, the director and his production team are laying the ground for his next film “Man of War”, also to be shot entirely in Cyprus.

“Man of War” is officially in the pre-production stage. The film produced and directed by Logothetis is expected to start shooting in Cyprus at the end of April.

“We have officially started the preparations for the production of our new film. Right now, we’re finalizing our budget, looking for the locations to shoot, organizing and preparing contracts,” Logothetis told the media.

He will also be collaborating with producer Todd Garner, former president of Walt Disney Productions.

The script of the film is written by Gary Scott Thompson, the writer of the blockbuster franchise Fast and Furious movie saga.

Logothetis (photo) will be working with the same production group that produced the action sci-fi Jiu-Jitsu, which includes Cypriot producer Chris Economides.

The production team is considering actors for the lead roles, but no contracts have been signed yet. 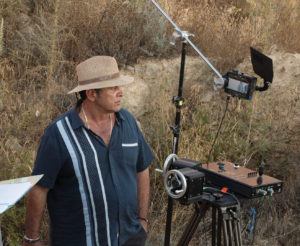 The team will be working with Highland Film Group which is behind successful films starring the likes of  Gerard Butler, Keanu Reeves and Bruce Willis.

The team is also working on two more film projects at the request of Highland Film Group.

The first of these two films will be titled Kickboxer: Armageddon, a sequel to Kickboxer: Vengeance.

A representative of the production team told the Financial Mirror that movie fans should expect to see a martial arts action movie of the likes of Kickboxer: Vengeance and Retaliation

The second film, Retaliation, is a revival of a big 80s production which starred Alain Mousi (the star of Jiu Jitsu), Jean-Claude Van Damme and Christopher Lambert.

Logothetis said that “for all these films, our first choice is Cyprus”.

He recently said that he plans to film another five films in Cyprus, after Jiu-Jitsu, worth a total of €125 mln.

Putting the ‘real’ Cyprus back into tourism

Cyprus is winning the fight to contain the coronavirus outbreak

Cyprus could permit entry to UK tourists in the next

Cyprus has been successful in controlling COVID-19 but must keep

Anastasiades to visit Israel on June 23

Anastasiades to visit Israel on June 23

Cyprus is winning the fight to contain the coronavirus outbreak

Cyprus could permit entry to UK tourists in the next