President Nicos Anastasiades inaugurated the new Petrolina liquid fuels storage facility at Vassiliko on Saturday, saying the company’s relocation was well within the timeframe agreed with the authorities and that this was the start of the implementation of the new energy centre.

The oldest Cyprus petroleum company’s fuel tanks on the Larnaca-Dhekelia road have been decommissioned and their dismantling is about to get underway, with other companies also relocating to Vassiliko, where international energy trader VTTV has already set up ship-to-shore facilities.

Petrolina, a stock exchange-listed company with the Lefkaritis family as its majority shareholder, has tripled its capacity, by installing 18 storage tanks holding 113,000 cubic metres, up from the 36,000 at the old terminal in Larnaca.

“This move will allow for Larnaca’s coastal area to be developed, which has been a demand of the town and surrounding communities for decades,” Anastasiades said at the inauguration ceremony, which he initiated by pressing the button for a fuel truck to be loaded at the fully-automated facility.

“In about 2-3 years, when I will be handing over my presidency, Larnaca will be one of the most modern and beautiful towns in terms of economic development and quality of life, as well as for tourism,” the president said, adding that his administration is investing some €78 mln in the town.

“This will be the rebirth of Larnaca,” he said, adding that a further €200 mln is being invested in the Vassiliko energy hub, in addition to the €300 mln investment by VTTV.

“In this area, we are investing €25 mln to help local communities directly, which has benefitted from job opportunities in construction,” Anastasiades said.

“As of January 1, the company is supplying Cyprus from this high-specifications liquid fuels terminal, keeping to the timeframes agreed with the state and with Larnaca Municipality,” he said. 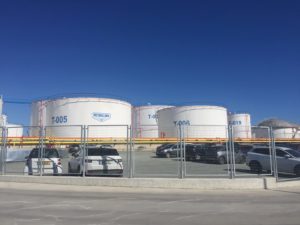 Adding to Anastasiades’ comments about developing the old terminal property in Larnaca, Costakis Lefkaritis said that he is assured these “will be included in the new planning zones for the area. We look forward to the rapid development of these properties, becoming the driving force for progress for the town of Larnaca.”

The company’s second-generation CEO, Dinos Lefkaritis, said the foundations for this venture were laid in 2003 when Petrolina bought out Total Aviation, and with it two storage tanks in the Vassiliko hub, “effectively taking the first step in moving out of Larnaca.”

“In 2004 we moved our entire JET A1 aviation fuels business to Vassiliko, and from 2005 to 2011 we leased a further three tanks for light and heavy fuel oils, as well as marine diesel.”

The CEO said that the turning point came in 2012 when the company acquired all seven tanks from Vassiliko Cement and the land of 49,000 sqm.

In 2017 Petrolina dismantled three old and smaller tanks and started building four new storage tanks with double capacity, installation of an advanced truck loading system, as well as the introduction of a new additives’ unit, and a fumes capturing unit that cuts back on emissions.”

“We continue with our steady dividend-paying policy, adding value to the economy, and we are to expand beyond Cyprus to serve international markets.”

However, he concluded by saying that in the journey towards building this new facility, “we came across many obstacles, chief among them being bureaucracy.”

“The area is still lacking certain infrastructure, mainly from the Ministry of Interior and the Ministry of Communications, and yet I am sure with the right cooperation between all of us, these will be overcome.”

Cyprus health authorities are worried over the spread of coronavirus

With only weeks to go until what is usually the

A Cyprus diplomat is among the three Cypriot women confirmed

Supplying Egypt with, as yet, untapped Cyprus natural gas was

Cyprus health authorities are worried over the spread of coronavirus

Supplying Egypt with, as yet, untapped Cyprus natural gas was