A British teenager found guilty of lying about being gang-raped in Cyprus by Israeli tourists was sentenced on Monday to four months in jail, suspended for three years allowing her to leave the country.

The teenager was found guilty of fabricating her rape claim in a case that put the spotlight on sex crimes in Cyprus.

The 19-year-old had alleged she was raped by 12 Israeli tourists in a hotel room in Ayia Napa on July 17, but then claimed Cypriot police forced her to sign a retraction statement which led to her being convicted of public mischief by a Famagusta District Court.

The Famagusta district court judge Michalis Papathanasiou had found the 19-year-old guilty of causing public mischief by lying about being gang-raped by a group of youths.

While the judge read out the sentence, demonstrators from Israel, Cyprus and the UK were chanting in support of the teenager outside the Paralimni.

Holding banners saying, “We believe you” and “Put an end to rape culture” demonstrators chanted ‘Judge, shame on you. Don’t you have a daughter too,’ and ‘Blaming the victim is a second rape,’.

Papathanasiou said he took into account mitigating circumstances in deciding on a suspended sentence.

These factors included her mental health, her age and the fact that she had missed her place at university because of the months she had had to stay in Cyprus.

The 19-year-old’s lawyers immediately said they would appeal the sentence at the supreme court.

“She was the victim of premeditated gang rape and stripped of her dignity and human rights,” one of her lawyers, Lewis Power, told reporters after the sentencing.

He said she would be flying home later on Monday. The teenager earlier last week had pleaded with UK Prime Minister Boris Johnson to “bring me home”.

The woman’s mother told reporters that the family is “relieved with the sentence” and expressed gratitude for “all the support that we have received throughout the globe.”

The case has been highly controversial from the outset with not just the British media but also the British government officially raising concerns over the treatment of the teenager by the Cypriot authorities.

Last Monday the Foreign Office issued a statement saying: “The UK is seriously concerned about the fair trial guarantees in this deeply distressing case and we will be raising the issue with the Cypriot authorities.”

Local media reports suggested she could be pardoned by President Nicos Anastasiades, but the family said they would not accept this as it would be tantamount to an admission of guilt.

Nicosia had said that it could not intervene as the Justice system was independent and it had ”full confidence” in the judiciary.

The teenager claimed she was raped by up to 12 Israeli tourists in a hotel room in Ayia Napa. She was charged, while the young men, aged between 15 and 20, who were arrested over the incident, were freed after she signed a retraction statement 10 days later. 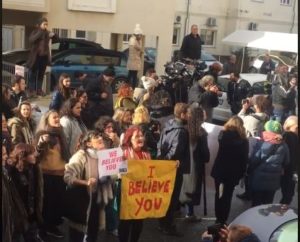 After spending a month in prison, she was set free on bail in August but forced to stay in Cyprus until her case ended.

She maintains she was raped but forced to change her account under pressure from Cypriot police.

The public mischief case was based on a retraction statement signed by the teenager following hours of questioning alone and without legal representation.

The case had sparked an international campaign calling tourists to boycott Cyprus.

A #BoycottCyprus hashtag erupted on social media following the teenager being found guilty while online petitions to drop all charges against the teenager soared.

Joining the #BoycottCyprus campaign the mother of the 19-year-old woman told BBC radio she supported calls on social media for British holidaymakers to avoid the island.

“My personal view is that’s a good thing to do,” the young woman’s mother said.

“The place isn’t safe – it is absolutely not safe. And if you go and report something that’s happened to you, you’re either laughed at, as far as I can tell or, in the worst case, something like what’s happened to my daughter may happen,” she had told the BBC.

The long-awaited €1.2 bln redevelopment of Larnaca port and its