It’s been more than three and a half years since the United Kingdom voted to leave the European Union and the country is finally on track to achieving Brexit by the end of January 2020.

A landslide Conservative win in the general election on December 12 paved a clear near-term path for Brexit. This burst of clarity resulted in Sterling staging its biggest rally in almost three years against its G10 peers, with the currency jumping over 3% against the Dollar to hit a 2019 high of 1.3510. 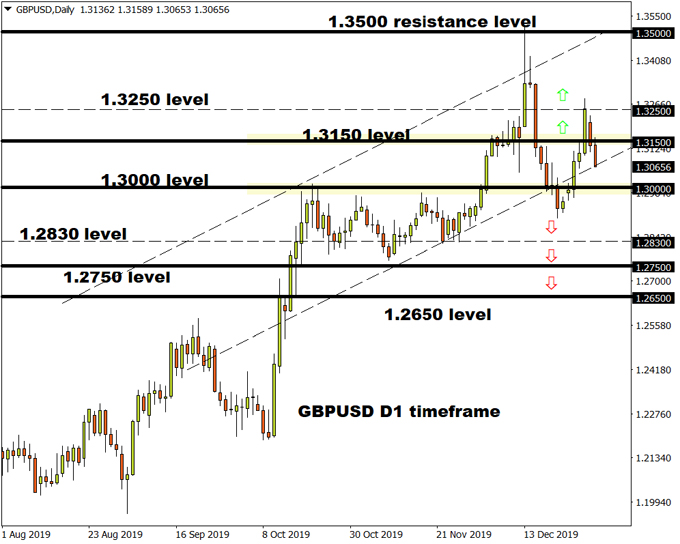 The good news for Brexit is that Boris Johnson is fulfilling his pledge to ‘getting it done’. However, the bad news is more uncertainty and drama will be on the cards during the 11-month transition period which the UK needs to negotiate a new trade relationship with the EU.

Pound out of the frying pan… into the fire?

The post-election honeymoon has ended abruptly, with the Pound’s ‘Boris bounce’ short-lived after suffering one of the worst weeks of the year in the immediate days after the election. Investors have quickly turned their attention to the threat of a no-deal Brexit at the end of the transition period in December 2020.

Fears over the United Kingdom failing to reach a trade deal with Brussels are already being fuelled by Johnson’s vow to outlaw an extension of the EU trade talks beyond the end of the current transition period. Without new trade deals in place, the UK will revert back to World Trade Organisation (WTO) rules with the EU, which will most likely result in additional tariffs and quotas on a range of goods, essentially hurting businesses and the economy.

Brexit and political developments are set to overshadow UK economic fundamentals during the first quarter of 2019 with the Bank of England expected to leave interest rates unchanged.

A brighter global outlook supported by easing global trade tensions could offer a bandage to the UK economy while supporting the Pound. Improving economic conditions should provide some relief to Europe which has always been the UK’s largest trading partner. Given the deep economic relationship between both sides, a stronger Europe is good for Britain.

With regards to the technical picture, GBPUSD is under intense pressure on the daily charts with prices struggling to keep above 1.30. Rising fears over a no-deal Brexit should continue to dampen the attractiveness of the Pound to investors, resulting in the GBPUSD trending lower. A strong close below 1.30 will most likely invite a decline towards 1.29 and 1.2830 in the near term. If the currency keeps below 1.29, prices are seen testing 1.2750 and even possibly 1.2650 by the end of the first quarter.

Alternatively, the Pound is seen rebounding if prices can break above 1.3150. A potential advance back above 1.3250 could encourage a return to the 2019 December election high of 1.35 during the first quarter.

Retail investors of defunct forex firm to be compensated

COVID19: Released from lockdown but only on parole

Cyprus confirmed only one new case of coronavirus on Saturday,

EuroAsia Interconnector, the Cyprus-Greece subsea electricity cable, got the go-ahead

We were nearing full recovery in the property market with

Trump to trigger June jitters? Dollar, Gold in the spotlight

The Cyprus Securities and Exchange Commission’s (CySEC) hefty fine of

By Han Tan, Market Analyst at FXTM The heightened uncertainties