As we approach the end of the year, investors are anticipating the year ahead and what to expect for precious metals like gold. The gold price was highly unpredictable in 2022, with much uncertainty over the direction it would take, while the price prediction for 2023 is also uncertain.

The year 2022 had begun with the hopes of recovery.

The lifting of pandemic restrictions worldwide promised the beginning of a recovery, as people would be able to spend in ways that had been severely limited in 2020 and 2021.

However, as had been warned, the price of sustaining the global economy during the pandemic emerged; skyrocketing inflation drove prices higher, squeezing many people’s incomes. The invasion of Ukraine by Russia which seemed unthinkable just a few years ago, added the energy crisis to the mix. In an effort to reduce inflation, interest rates have been aggressively raised.

The gold price forecast for 2023, therefore, has various driving factors to consider, such as US dollar, geopolitical concerns, inflation and interest rates. Although no one can predict what will happen to gold in the future, how these factors continue to evolve in 2023 will affect its price.

In 2022, the dollar got stronger, which had a significant impact on the price of gold and other currencies. Compared to the major currencies, the dollar index, showed a 20-year high, and some investors turned to the dollar as a safe haven for their funds.

Despite increasing inflation, the US economy performed well, supporting low unemployment. Due to this, the Federal Reserve aggressively raised the country’s interest rates, which are now between 3 – 3.25%. This is much above the European Central Bank, which has a rate of 0.75%, and is comparable to the Bank of England, which has a rate of 2.25%.

If the Fed keeps raising rates aggressively and the US economy avoids a recession, the dollar is anticipated to be strong in 2023, keeping the price of gold stable. Ultimately, it would be expected that high interest rates would slow growth and could cause a recession even in a robust economy like the US. The dollar may decline again as a result, increasing the price of gold.

Inflation and interest rates are, of course, linked to the strength of the dollar. In many countries, inflation has stayed high throughout 2022. While the latest figure from the US put CPI at 8.3% year-on-year, the UK is forecast to reach 11% by the end of the year.

In an effort to reduce inflation, central banks including the Fed, ECB, and BoE have already raised interest rates, but with limited impact so far.

These two forces are currently acting against gold; interest rates are driving down its price while inflation keeps prices high.

The direction central banks take will then have an impact on the price of gold in 2023. The price of gold could decrease more if rates continue to rise and inflation declines. However, if inflation remains fixed, this should still offset the negative impact of high interest rates.

A major geopolitical shock occurred in 2022 as a result of Russia’s invasion of Ukraine. The sanctions imposed on Russia have put additional pressure on the world economy, particularly as a result of the skyrocketing energy prices. Europe is expected to face a difficult winter or energy rationing, further damaging any industrial output from key countries like Germany.

The conflict has dragged on for several months, and there seems to be no conclusion in sight. There have also been concerns over any further escalation, which could spill beyond economic sanctions into a more serious war.

Beyond Russia, China continues to be a significant geopolitical concern for the entire world.

With growing rhetoric in the country escalating in recent months, there are worries about China taking military action over Taiwan, and the reaction of countries like the US to this. Investors will therefore undoubtedly be keeping a close eye out for any potential conflict in both Ukraine and Taiwan, and how it might affect the price of gold in 2023.

Despite a wide range, the majority of the gold price 2023 predictions suggest a similar price range to 2022. 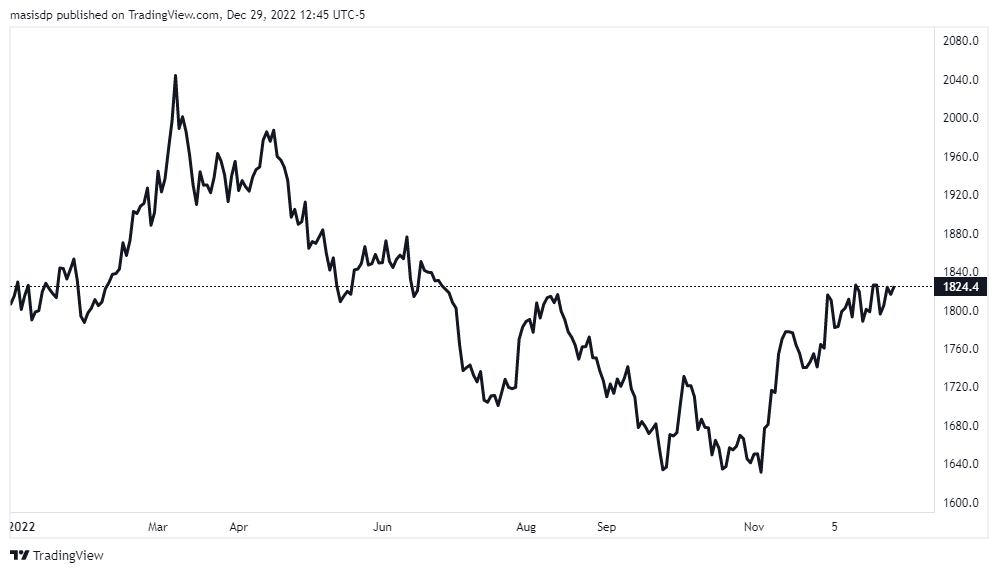 The dollar’s strength is mentioned as one of the main drivers in many forecasts. They anticipate that the dollar will hold its ground or strengthen further in the first half of 2023, before slowing growth results in interest rates peaking or being lowered. This weakening of the dollar will support a rise in gold prices in the remaining months of the year.

Due to the uncertain nature of the concerns about Russia or China, which might, of course, have a significant impact on the price of gold in either direction, most forecasts for 2023 fail to mention them.

It remains to be seen then how accurate these gold price forecasts will be, but the new year is positively set to be another interesting one for investors.

Stefan Nolte is Director of Liemeta ME Ltd, a provider of physical storage of precious metals at its prime location in Liechtenstein as well as trade services of precious metals, mainly gold, silver, platinum, and palladium

After a significant slowdown in December, the last month of