Leading stock exchanges are listing new firms as investors anticipate a return to normalcy, despite the world economy staring at a possible recession as inflation continues to wreak havoc across the markets.

In Asia, the Shanghai Stock Exchange added the third highest number of companies at 106, representing a growth of 5.25%. The Chinese exchange has 2,123 companies with a capitalisation of $6.87 trln.

Elsewhere, Europe’s Euronext listed only three companies over the period. The exchange, with $5.62 trln in market cap, has a total of 1,981 companies. 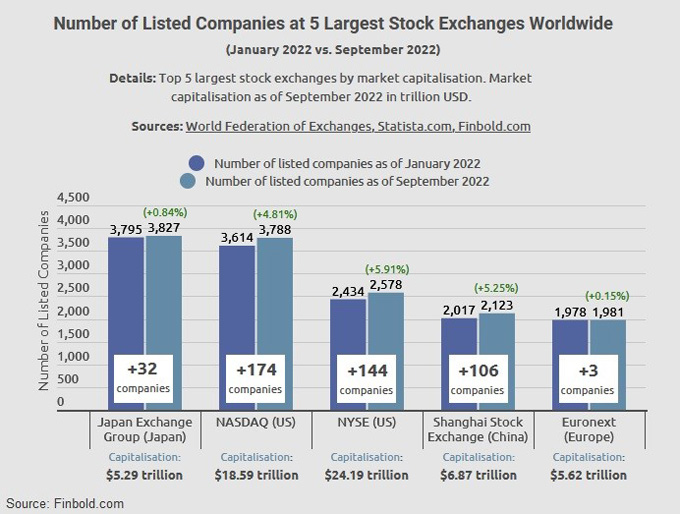 The Finbold study delved into the current market conditions likely to impact the stock market.

“The increase in the number of publicly listed companies appears to defy the ongoing economic condition impacted by both emerging and residual factors,” the research found.

“Notably, the global economy is facing geopolitical tensions, stock market volatility, growing concerns regarding commodities, the impact of inflation, and continued interest rate hikes. These conditions have culminated in widespread fears that a recession might be imminent.”

Overall, the Finbold report said that stock market’s recovery will likely depend on how central banks contain inflation and bring stability to the economy. With stabilisation, companies that have paused their IPO activity might start listing.

A strong earthquake registering 7.8 on the Richter scale in

A huge few days ahead

Packed week of risk events to inject life into markets