As many of us learned in Principles of Macroeconomics, the Federal Reserve had to aggressively tighten monetary policy to tame inflation in the late 1970s and early 1980s. Some have drawn parallels between today’s high inflation and that of 1970s and 1980s.

This is not an apples-to-apples comparison, but one solution that helped former Fed Chair Paul Volcker all those years ago could aid current Fed Chair Jerome Powell now.

When Volcker became chair of the Federal Reserve Board in August 1979, the annual average inflation rate in the United States was 9%. Inflation had risen by 3 percentage points over the prior 18 months and would peak around 11% in early 1980.

Volcker raised the effective fed funds rate from 11% to 20% in early 1980. This has been widely credited for breaking inflation’s back. But it was only part of the reason, since Volcker had a lot of help from business investment.

Higher oil prices were part of the U.S. inflation problem in the late 1970s and early 1980s, but they were also part of the cure. U.S. nominal business investment in mining exploration, shafts and wells jumped in response to higher global energy prices.

When Volcker took over as Fed chair, nominal business investment in mining exploration, shafts and wells accounted for 0.78% of nominal GDP, but that would steadily increase until it peaked at 1.8% of nominal GDP in the fourth quarter of 1981. The number of active rotary rig counts in the U.S. more than doubled from 1979 to 1981.

We used a Granger causality test to check if there is a causation relationship between the CPI for energy and U.S. business investment in mining exploration, shafts and wells. The results show that the CPI for energy does Granger-cause changes in investment mining exploration, shafts and wells. We tested this with several lags. The causal relationship runs in both directions, which isn’t surprising.

The additional investment helped cool inflation in the U.S., but Volcker’s approach to monetary policy also helped. The Fed then didn’t understand the importance of inflation expectations, which became dislodged

Aggressive interest rate hikes re-anchored expectations. However, business investment in mining exploration, shafts and wells would have been able to accomplish the job.

It could take longer for business investment in mining exploration, shafts and wells to help Powell because of supply-chain and labour-supply issues.

Active rotary rig counts are steadily rising but are still well below their pre-pandemic level and significantly lower than would be expected with West Texas Intermediate crude oil prices north of $100 per barrel. This could cause the Fed to raise interest rates more than we have indicated in our baseline forecast and more than markets are pricing in.

We created a scenario where the Fed does whatever it takes to bring year-over-year growth in the core personal consumption expenditure deflator back down to the central bank’s 2% target by the end of 2023.

The core PCE deflator is the Fed’s preferred measure of inflation. If we adjust our baseline outlook for core PCE inflation by the average forecast error for the series in 2021, then the core PCE deflator will decelerate from a peak of 5.4% in the first quarter of 2022 to 3.5% by this time next year.

The rationale for adding the forecast error to the baseline to create an alternative baseline forecast is that the forecast was consistently low for inflation, and risks are heavily weighted toward that occurring again.

The Fed is assumed to increase the target range for the fed funds rate by 50 basis points at each Federal Open Market Committee meeting starting in May and wrapping up by the end of the first quarter of 2023.

In such a way, the terminal rate — the peak in the fed funds rate during this tightening cycle — would be 4%, significantly higher than the 2.75% terminal rate pencilled into the current baseline. 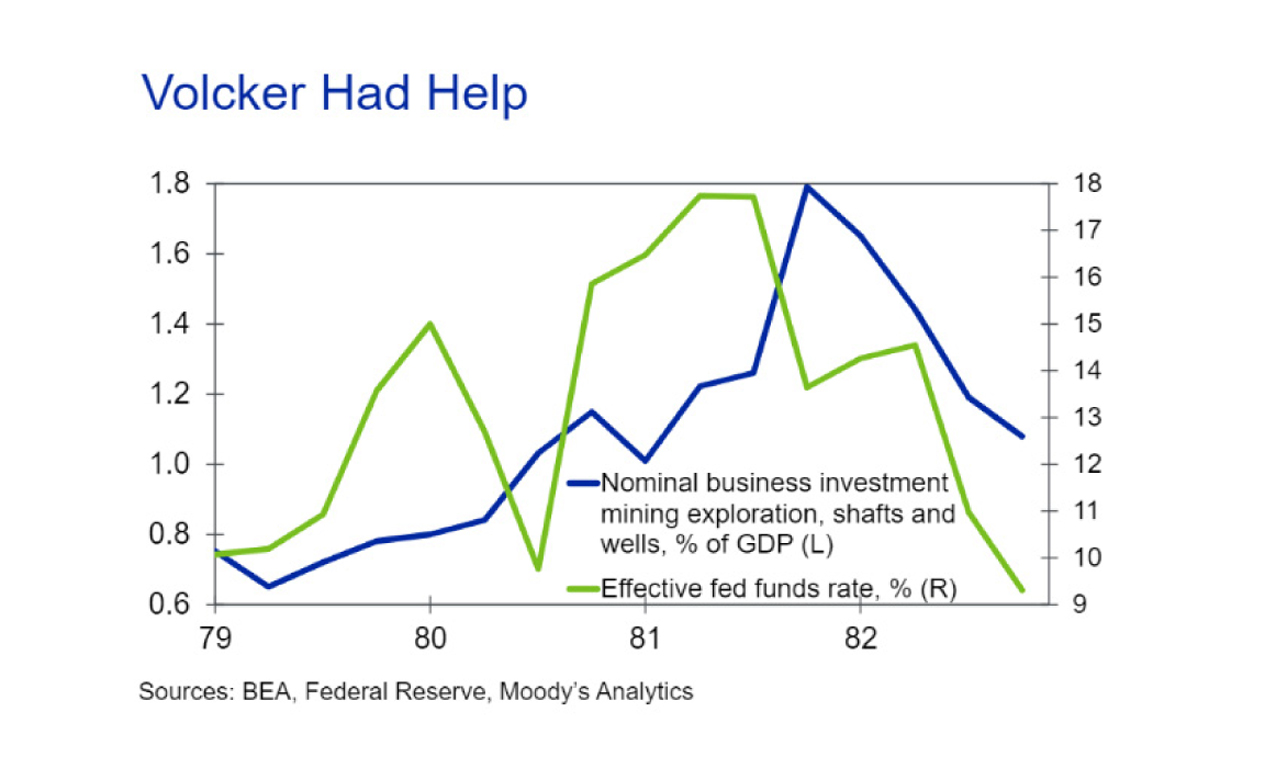 The result is a recession, but the Fed tames inflation. For the Fed to engineer a soft landing—taming inflation without causing a recession—it will need some help from business investment.

There are other things that could help tame energy inflation, including the restoration of Middle East oil production, the shift in consumer preferences toward more fuel-efficient vehicles, and the shift away from oil in electricity production.

Financial markets are already pricing in an aggressive Fed that will front-load interest rates, returning the fed funds rate to its neutral rate by the end of this year.

A number of indexes that we track have shown that financial conditions have tightened, but the Fed is going to need more if growth is to slow enough to tame inflation and prevent the unemployment rate from falling too low.

The unemployment rate is close to its pre-pandemic rate and signs point to it falling even further over the next few months. This complicates the Fed’s job. There has never been an increase in the unemployment rate of more than 30 basis points, on a three-month moving average basis, that wasn’t associated with a recession.

The Fed’s latest Summary of Economic Projections has the unemployment rate averaging 3.5% in the fourth quarter of this year and next, even as it expects above-potential GDP growth. The Fed could be anticipating further increases in the labour force participation rate, which would keep the unemployment rate relatively flat.

However, the unemployment rate has been dropping noticeably faster than the Fed anticipated since the end of the recession.

The Fed’s SEP has real GDP growth of 2.2% next year and 2% in 2024. This is above its estimate of potential GDP growth of 1.8%. To cool inflation, the Fed will likely need GDP growth closer to 1%, if not lower, in each of the next two years. Therefore, the Fed will want financial market conditions to tighten further to help take some of the steam out of the economy.

Reducing GDP growth in each of the possible. Our past work has shown that a 10% decline in the S&P 500 plus a 100-basis point increase in the 10-year Treasury yield reduces GDP growth over the course of a year by roughly 1 percentage point.

Options for the Fed include raising the target range for the fed funds rate more quickly—there have been rumblings of a 75-basis point rate hike. The Fed could also signal that the terminal rate this cycle is higher than previously thought.

But what the Fed will likely lean on first is its balance sheet, which it could use to tighten financial market conditions.

Hope fades ahead of CPI data