Just in time for the summer season, Cyprus has a new flying ambassador; TUI is the first international airline to name an aircraft after a Cypriot town.

Larnaca, the most important region of Cyprus for TUI vacationers, is the namesake for the group’s new Boeing 737-8.

At Larnaca on Sunday, the German aircraft was greeted with water fountains by the airport fire department and then received its name Larnaca by House Speaker Annita Demetriou.

“The Boeing 737-8 Larnaca is an ambassador for Cyprus and TUI throughout Europe.

“People want to travel after two years of the pandemic; they sit on packed suitcases for spring and summer.

“Things are looking up for hotels, family businesses, and many local partners who work with us to make guests’ holidays successful,” said TUI CEO Fritz Joussen.

He was actually on holiday in Cyprus when asked to attend the plane’s arrival at Larnaca airport.

The CEO of the travel giant has visited Cyprus 22 times.

“TUI is the strategic partner for the holiday countries in Southern Europe – including Cyprus, where we have been at home for decades – with our successful joint venture and our own hotel brands Atlantica, Robinson, TUI Blue and our cruise ships from TUI Cruises, Hapag-Lloyd and Marella.

“This also applies to our aircraft: Larnaca is one of the most modern and CO2-efficient aircraft.

“In 2022, we want to bring more guests to the island, especially from the UK and Germany, than in previous years and thus make a significant contribution to tourism success in Cyprus,” said Joussen. 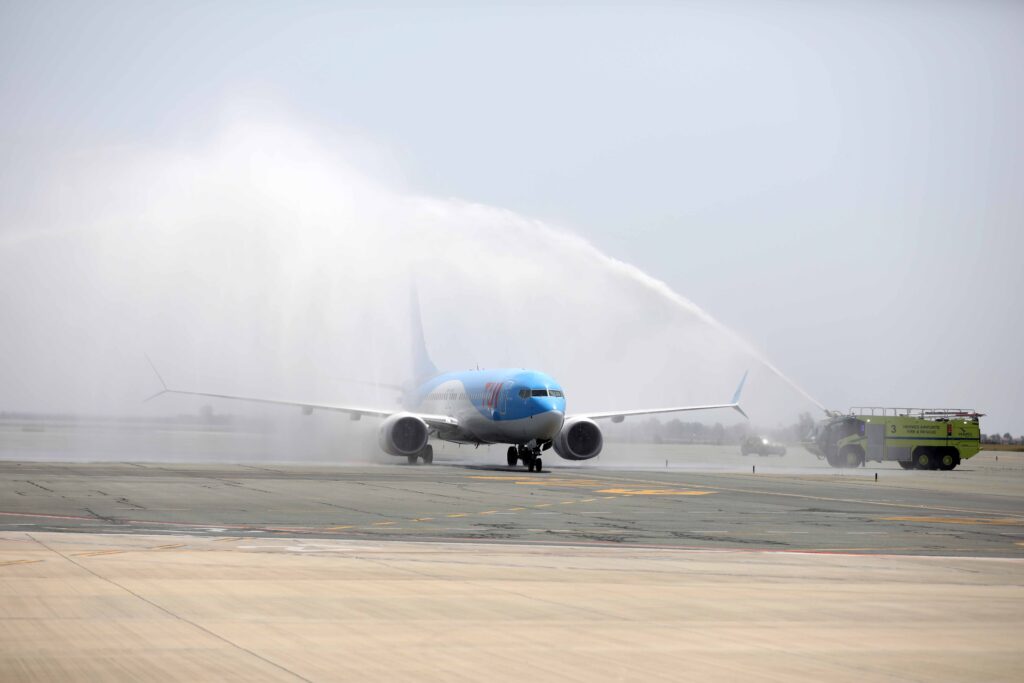 Annita Demetriou was chosen to provide the good luck blessing to the TUI Boeing 737-8 named after Larnaca, where she is also a resident.

“It is clearly an honour that a long-standing partner such as TUI has chosen to name one of its aircraft after the city of Larnaca, but more importantly, this marks the strong relations between TUI and Cyprus and the confidence put on the destination”, says Eleni Kaloyirou, CEO of Hermes Airports.

Cyprus and TUI have been linked by a long partnership spanning five decades.

With around 500,000 guests annually, TUI is the market leader in Cyprus and offers tours to the island from eleven European markets.

The group operates 19 own-brand hotels, including 14 in Larnaca and five in Paphos.

Its strategic partner is the Cypriot hotel chain Atlantica.

Seven TUI Blue hotels are also part of the portfolio.

TUI offers more than 330 hotels in Cyprus and has close partnerships with local hoteliers. As a result, the third-largest Mediterranean island still has great growth potential and plays an increasingly important role in Germans’ travel plans.

TUI has already expanded its flight offerings with its own airline from Germany in recent years.

From April, it flies direct from Hanover, Düsseldorf, and Frankfurt to Larnaca.

This summer, it will offer more than 3,300 flights to and from Cyprus, with the largest share from the UK and Germany.