Austria and Cyprus paid homage to the UN peacekeepers who died in 1974, honoured the thousands of ‘blue berets’ that served during the past six decades and reiterated their resolve to cooperate on joint defence matters, migration and regional security.

Federal Minister of Defence Klaudia Tanner, on an official visit to the island, laid a wreath at the monument for the three fallen Austrian peacekeepers, killed by a napalm bomb attack during the Turkish invasion in 1974, half-way between Nicosia and Larnaca.

“On the 14th of August 1974, four Austrian UN peacekeepers tried to prevent an attack on the village of Koshi by mediating between the Greek Cypriot National Guard and the Cypriot Turks. Our soldiers thus withdrew and continued to observe the situation, as their mandate required,” Tanner said.

“Hours later, an attack by the National Guard on the village of Koshi was followed by an overflight by a Turkish strike aircraft. It dropped its bombs on the vehicle used by the UN soldiers and on the soldiers themselves, who were taking cover.

“Three of the four soldiers died in this attack.”

The three peacekeepers were First Lieutenant Johann Izay, Master Sergeant Paul Decombe and Corporal August Isak, all serving in the AUSCON contingent, and, according to eyewitness reports at the time, driving in a clearly-marked UN vehicle.

“The Republic of Austria’s goal has always been and will always be to bring peace to countries riven by conflict. No one wanted these brave soldiers to give their lives. The Austrian Armed Forces, however, refused to be intimidated,” Tanner added.

The Austrian official said that in the past 62 years, more than 100,000 soldiers and civilian helpers made an indispensable contribution to world peace by serving in more than 100 international peace-support and humanitarian missions.

Austria has supported the UN peacekeeping mission in Cyprus from the very beginning. In 1964 with a medical contingent, and six years later with an infantry battalion.

“Our task was to prevent further fighting and to restore order on the island in cooperation with other states. More than 17,000 Austrian soldiers were deployed in this mission and Austria continues its support, although today with a smaller force.”

She added that, “what worries us, is that Cyprus and the entire Mediterranean region are exposed to enormous pressure. Austria therefore looks at this situation with great concern.”

“As a member of the European Union, we fully support the position of Cyprus. The territorial sovereignty of a state must not be violated under any circumstances. Any action in this regard is a violation of international laws.”

“The critical situation in and around Europe means that, in Austria, we expect an increase in migration. We need more robust and stronger external border protection. We do not want Austria, a small landlocked country, to become a destination for illegal migration. The same applies to Cyprus, a small island in the Mediterranean,” Tanner said.

The two officials, who met recently on the sidelines of an EU defence ministers’ meeting, have been in discussing with their colleagues in advancing a fundamental document, the Strategic Compass, which is expected to be to adopted in March.

This document aims to identify threats and crises at an early stage and to avert hybrid threats.

As regards the situation on Ukraine’s borders, Tanner said, “the current situation in Ukraine poses the risk of full-scale war on the European continent. These are alarming prospects.”

“However, Russia is an important player in Europe’s security architecture. Sustainable security can only be achieved with Russia. Clear lines must be drawn together with the European Union and any Russian activities on Ukrainian territory must be sanctioned.”

As regards the EU Rapid Deployment Capacity, Tanner said that crises such as those in Russia and Ukraine at the moment show that it is necessary to work at the EU level, and to build on the experience of the EU Battlegroups to form such a force of up to 5,000 personnel.

Military exercises to optimise interoperability and operational readiness should begin as early as 2023,” she said.

Petrides said their discussions also included Turkey’s escalating provocations and illegal activities, in relation to Varosha and Rizokarpaso, as well as in Cyprus’s EEZ and maritime zones, national airspace and the Nicosia FIR.

He added that the two ministers also discussed practical ways to further enhance mutually beneficial defence cooperation, in order to create additional opportunities, for the personnel of the respective armed forces.

Petrides said there is “excellent collaboration between our respective defence academies, which for a number of years promote and organise through joint activities, CSDP related training courses.”

“Next May, our two countries will jointly organise an orientation course to be hosted in Cyprus,” within the framework of the EU’s Common Security and Defence Policy.

CSDP provides the EU with the capacity to undertake peacekeeping and conflict prevention missions and to strengthen international security in accordance with the principles of the UN Charter. 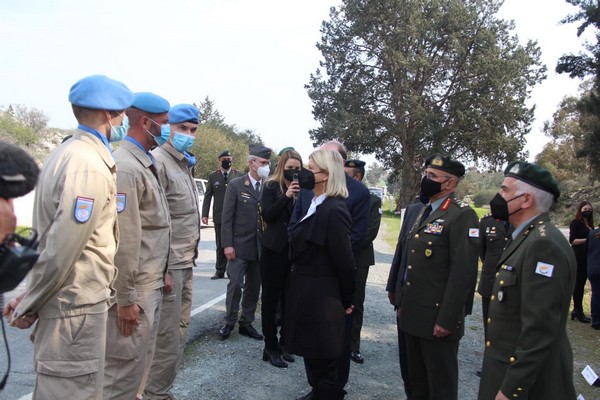 Defence Minister vows no ‘cover up’ in army death

Environmentalists are not ‘buying’ official promises that a local development

The new discussion about what happened in Crans Montana brings

The publication of the proposed new law on common charges

Defence Minister vows no ‘cover up’ in army death