When the exhibition of paintings rescued from Turkish occupied Famagusta closes at the end of February, what happens next is creating a dilemma, culturally and legally.

The artistic dilemma is, will the works of art be cared for by the rightful owners or should they be a ward of the state?

And, when returned, will the heirs keep them in the public sphere for everyone to appreciate?

The exhibition “Rebirth”, on display at the new State Gallery of Contemporary Art – SPEL, includes 219 works of art recovered by a bicommunal effort from the port city, abandoned after the Turkish invasion in 1974.

These were returned in February 2020 as part of confidence building measures initiated by President Nicos Anastasiades and then Turkish Cypriot leader Mustafa Akinci.

Similar to recovery efforts of Nazi-looted art, what should happen to this collection creates a legal precedent for the rightful owners or inheritors who in some cases do not exist.

The legal dilemma, according to lawyer Achilleas Demetriades, is these paintings were deprived of their owners as a result of the Turkish invasion and occupation.

“They were lost as a result of war, but I think the term ‘looting’ rather than ‘stolen’ should apply.

The famed port city of Famagusta was a hotspot for tourists and holidaymakers, celebrities, and young entrepreneurs.

It was a major magnet for wealthy business owners and hoteliers that changed the landscape of the island’s east coast. 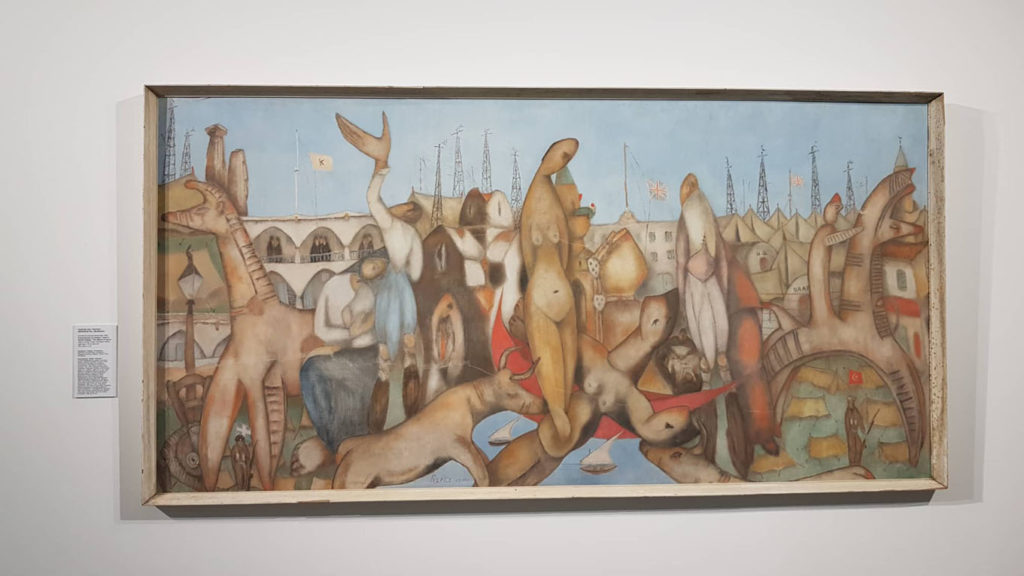 Thus, Famagusta, and mainly Varoshia, became a melting pot for culture and art as it became home to artists and patrons from Greek, Turkish, Armenian, and other communities.

The bohemian lifestyle gave rise to an extraordinary youth including musicians, poets, writers, and thinkers.

Artists like Michalakis Hadjidemetriou established himself as a leading portraitist. The recovered series “Varoshiotes” depicts prominent individuals from Varosha, an important discovery for art historians and scholars today.

Yiannis Toumazis, co-curator of “Rebirth” and Director of the Nicosia municipal arts centre NiMAC, discovered “of the 380 drawings and paintings, mainly portraits from the 1920s, which were donated by the artist to the Municipal Gallery, only 63 were returned.”

The return of such a collection is “hugely important” to the history of Cypriot contemporary art, said Toumazis, but also to the people of Cyprus.

“These 219 artworks were protected at that time by certain officials, who cared deeply about art.

“That’s how they were saved. Fortunately, by being kept in a safe place, their looting was prevented.”

Considered a very progressive cultural institution at the time, the municipal gallery had aimed to acquire a “Cyprocentric” character, including works and masterpieces by noteworthy foreign and Greek artists of the 1930s and important Greek Cypriot artists of the 20th century.

“Forty-four works belong to one of the island’s most prominent artists, George Pol. Georghiou (1901–1972),” said Toumazis.

“Although self-taught, Pol. Georghiou created a very rich artistic idiom, distinguished for its technical prowess, as well as the diversity of its subject matter, always influenced by Cyprus and its history.”

“Finally, 24 works belong to one of the most important Cypriot modernists, Stelios Votsis.

“According to testimonies by family members, these remained at Famagusta port on their way back from a solo exhibition in London and we see them again almost half a century later.”

The exhibition at the Commonwealth Institute Art Gallery, entitled ‘Votsis: Recent Paintings’ was held from 26 October to 18 November 1973. The works were from the series ‘Presences’, which the artist painted between 1970 and 1973.

The decline of the cultural climate after 1974 influenced artists greatly, as many of them lost their homes and studios.

“Many suffered a period of personal crisis, which influenced their creative work. “While some preferred to maintain a silence, others adopted themes related to the tragic events,” Toumazis said.

“Many went back to the figure and humanistic values, showing a kind of regression towards realism, as happened with artists after the First World War.

Others used allegory and fantasy elements to release themselves from the sadness and anger in an explosive manner, such as Giorgos Skotinos and Loizos Sergiou.

“Loizos Sergiou metaphorically employed the themes of slaughter and cruelty, aiming to stigmatise politics and military violence, while Christos Foukaras continued with realism, outlining the traditional world of Cyprus.”

Some of the paintings in the ‘Rebirth’ collection are in poor condition, in an even more fragile state than the bruised frames surrounding them.

But Toumazis told the Financial Mirror that there is an ongoing effort to restore and preserve these jewels of historical and cultural importance.

The Technical Committee on Culture has received support from the UNDP and the EU for the works that were first exhibited at the Ledra Palace following their return on 3-4 February 2020, to undergo conservation.

Later, the task of preservation was passed on to the Ministry of Education and Culture.

However, this responsibility will be entrusted to the rightful owners when they are eventually returned to them.

Intellectual property and human rights attorney Demetriades told the Financial Mirror that the rightful owner can take many forms.

“The owner is the person who had bought the painting from the artist and these works of art should be restored to their owner, be that the Municipal Gallery of Famagusta or individuals who are in the process of reclaiming them.

“On an ethical level, the ‘preservation of cultural heritage’ could well become a reason to make it part of a wider national collection.

“I can understand the Municipal Gallery of Famagusta lending the art to the state for public viewing.

“Nevertheless, I cannot understand how the state can interfere with the property rights of individuals.

“Perhaps the state should consider buying them from these individuals and if the state cannot afford it, resort to creative financing, such as crowdfunding.”

One should also not forget copyright, Demetriades said.

“The artist or their heirs, 70 years after his or her death, still control the right to reproduce the work and this is a matter that people should seriously take into account.”

After the relaxation of lockdown measures, the exhibition should not be missed.

It will remain open for public view at SPEL, opposite Famagusta Gate, until February 27.

The author is an art advisor and collections consultant, specialising in museology, trafficking culture, forensic art

Mystery 117kg of cannabis washes up on Famagusta shores

20 kgs of cannabis wash up on Famagusta beaches

With the presidential elections around the corner and the outgoing

Mystery 117kg of cannabis washes up on Famagusta shores

20 kgs of cannabis wash up on Famagusta beaches