Leaders of the parliamentary groups will meet on Friday to decide on a new Speaker of the House after the incumbent Demetris Syllouris resigned under extensive pressure to go following ‘golden passport’ revelations.

Syllouris said he had done nothing wrong and was not using his office as immunity from the ongoing police investigation.

“I have not violated the law in any way, but my resignation removes any pretext by some that my presence in the office of Speaker hinders in any way the smooth functioning of Parliament,” Syllouris said in his resignation letter Thursday.

Earlier this week, Syllouris said he would only abstain from his duties from October 19, pending the results of a police investigation but there was mounting pressure for him to go.

He has also resigned as an MP.

He said people had taken advantage of his initial stance not to resign for political gain.

“My decisions were based on the firm belief that I have not done anything legally wrong and that my possible resignation would leave the impression to the contrary.”

“I find that the continuation of my tenure as Speaker of Parliament has been misinterpreted.”

Former Attorney General Costas Clerides said on Wednesday that it was incomprehensible for the House Speaker to abstain from his duties if these are not related to health or his absence from the country.

He called for Syllouris to “do the right thing”.

Already, the communist party AKEL forced its MP, Christakis Giovanis, a major property developer in the holiday resorts of Ayia Napa and Protaras, to resign his seat after an Al Jazeera sting documentary suggested that he and his company were involved in securing ‘golden passports’ by sidestepping strict regulations in the Citizenship for Investment Scheme.

Syllouris was seen in the same video, during a private dinner at Giovanis’ house, telling the fake investor how an allegedly convicted criminal could circumvent the system and secure a passport, based on the size of the investment.

Public anti-corruption protests culminated on Wednesday evening, with hundreds gathering outside the Philoxenia Conference Centre where parliamentary sessions have moved due to the Covid-19 restrictions, calling on Syllouris to resign and saying that the Al Jazeera revelations had humiliated Cyprus. 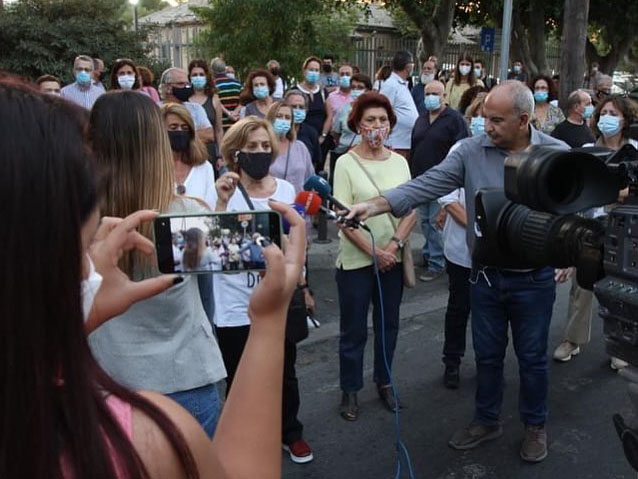 The CIS programme foresees an investment of about €2.2 mln, which would have to be vetted by the Interior Ministry, to be granted automatic naturalisation.

To date, the CIS programme has earned about €9.7 bln in direct and indirect contributions and created about 10,000 jobs since 2013, with the employers federation (OEB), the chamber of commerce (KEBE) and the association of large property developers, saying it should not be abolished, but revised and made stricter.

Cyprus was not stringent enough in its vetting process and after heavy criticism, it tightened the CIS programme.

It appointed a technocratic committee to probe the process for citizenship and last week, the government said it was rescinding seven passports.

The CIS programme, the darling of accountants, lawyers, and property developers on the island, requires an investment of at least €2 mln and purchase of a €500,000 residence plus tax.

Investors also have to pay a €150,000 application fee with the money earmarked for low-cost housing and innovation.

However, an ‘economic impact assessment’ of the CIS programme, conducted by advisory firm EY, showed that throughout the programme a mere 6% (about €567 mln) of foreign investments in Cyprus ended up in state coffers in fees and taxes, and a further 2% (€211 mln) in the national pension fund.

More than two-thirds of the investment funds lined the pockets of property developers, who were on the brink of bankruptcy.

The new money helped them reduce their non-performing loans to banks, which in turn were hit by the exposure to property-secured debt.

Justice Minister resigns before being pushed out

Justice Minister resigns before being pushed out