With far less money available to football clubs and a steep drop in footballers’ value, the coronavirus outbreak triggered a sharp fall both in the volume of transactions and transfer fees.

According to data presented by SafeBettingSites.com, the combined value of 1,381 transfer deals completed in the this year’s summer transfer window hit €3.3 bln value, a 40% plunge year-over-year.

This is a far cry from 2019 which saw a record value of football transfer deals, with clubs in Europe’s “Big five” leagues spending €5.5 bln, or some €900 mln more than the 2018 summer transfer window.

As the leading European football league in terms of revenue and brand value, the Premier League also tops the list of completed transfers deals in season 2020/2021. 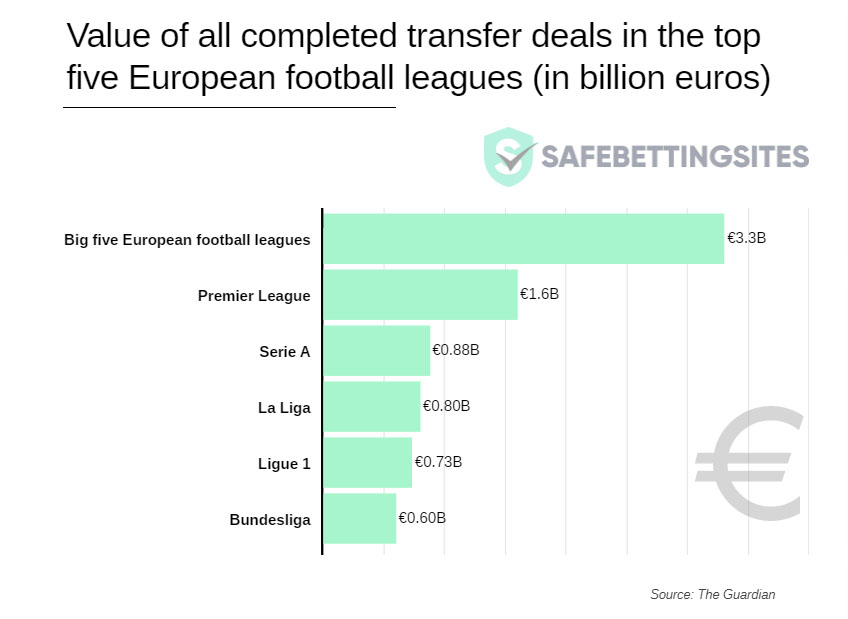 During the 2020 summer transfer window, Premier League’s clubs spent a total of €1.6 bln on acquiring players, almost 50% of total transfer deal value this season, according to TransferMarkt and The Guardian data.

Statistics show that Kai Havertz’s €80 mln transfer from Bayer Leverkusen to Chelsea represents the most valuable deal in Premier League and Europe in the 2020/2021 season.

With €882.3 mln spent on 353 transfer deals, Italy’s Serie A ranked as the second-leading football league in Europe.

On September 1, a former Lille player Victor Osimhen signed a five-year contract for SSC Napoli with a transfer fee of €70 mln, the most valuable deal in Serie A this season, and the third-largest in Europe. Statistics also show the market value of the 21-year old centre-forward player jumped by €10 mln in 2020, growing from €30 mln in December 2019 to €40 mln in August. 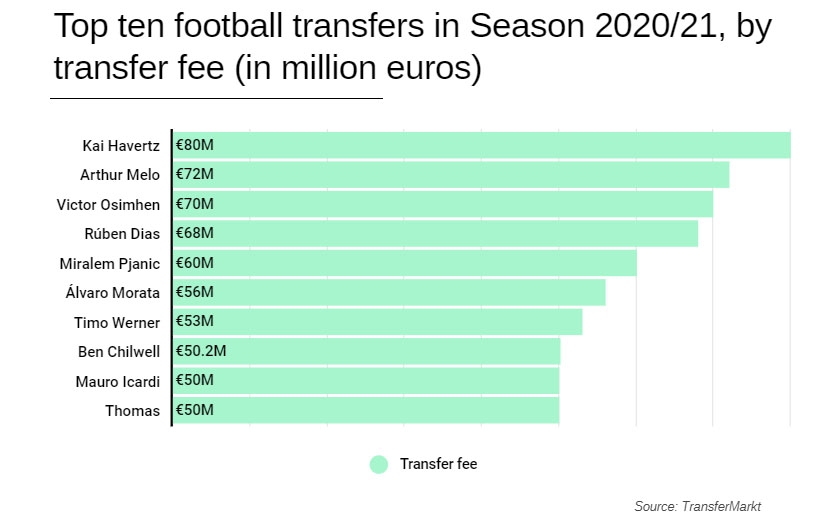 The TransferMarkt data revealed that Arthur Melo’s €72 mln worth transfer from Barcelona to Juventus represents the most valuable deal in Spain this season and the second-most valuable in Europe.

The Guardian and TransferMarkt data revealed that football clubs competing in the French Ligue 1 spent a total of €736.9 mln on 323 transfer deals at the start of the new season, ranking in the fourth place among the “Big five” European leagues. Bundesliga clubs follow, with €600.7 mln worth of transfer deals, respectively.

In 2019, the combined value of the three most valuable football transfers amounted to €323 mln.

Learning to swim in cash

The Cyprus Supermarket Association is calling on the Health Ministry

Cyprus COVID-19 vaccination rollout this week has reached people in

COVID19: Some measures may be lifted for Greek Easter

With Greek Orthodox Easter two weeks away, government officials are

The Cyprus Supermarket Association is calling on the Health Ministry