As gold is mainly a long-term wealth protector, it makes sense to have a look at the longer term as well. The gold/EUR price increased by 38.08% during the last 12 months, and by 79.84% in the last five 5 years.

The table shows annual price increases of gold during the last 15 years, based on various currencies. 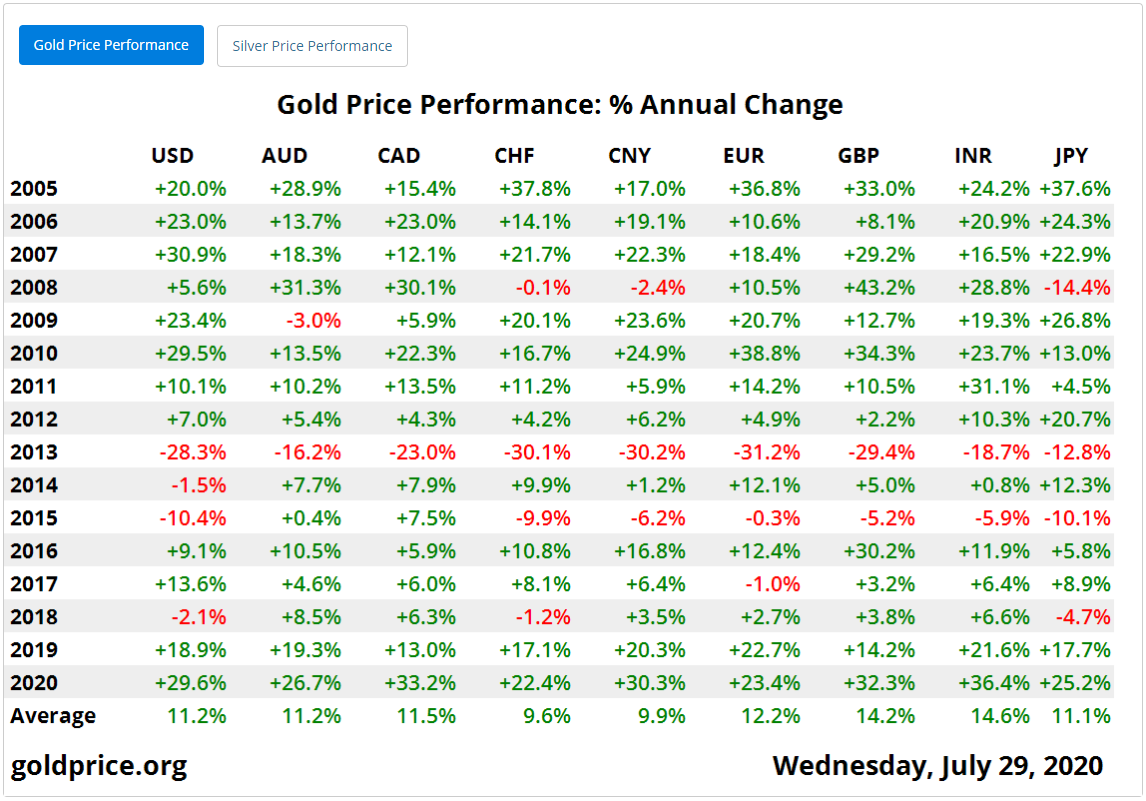 What are the reasons for continued gains of gold?

Short-term investors do have a different strategy. Naturally, they are hunting for short-term profits and are not primarily driven by the concern of wealth protection in the medium to long term.

Therefore, short-term investors invest in tradable papers, such as gold-based ETFs. Investors with the primary goal to protect what they have, are investing in physical gold and store it safely with professional vaulting companies.

The increasing turbulences in the world, only further triggered by COVID-19 and the lasting changes it created, did chase investors into gold investments. The heavily increased demand pushed up the price.

The irresponsible quantitative easing (QE) policy of the Federal Reserve, the ECB and other central banks to stimulate the markets and to fight increasing economic problems around the world are actually decreasing confidence in markets, in economies and in the ability of governments and central banks to improve things. That happened long before the corona virus appeared, because of our weakening global economics, resulting in increasing demand in gold, as well as in silver.

In addition to those already existing but unsolved problems, COVID-19 did show us how vulnerable our lives, our businesses, our economies, and the markets are.

We were, of course, caught without any preparation. The fact that we did not solve our economic problems but opted to cover them with a shiny make-up, made us pay severely for our mistakes once COVID-19 became a part of our lives. The stock markets went mad, businesses were locked down and then often closed, our economies shrank dramatically.

Politicians and many others still believe that everything will be over soon, but it will not. The majority of people and market participants clearly see that we will not return to the light-hearted lives that we enjoyed before.

And that seriously increased the need for a safe haven for wealth, and thus the demand for gold. 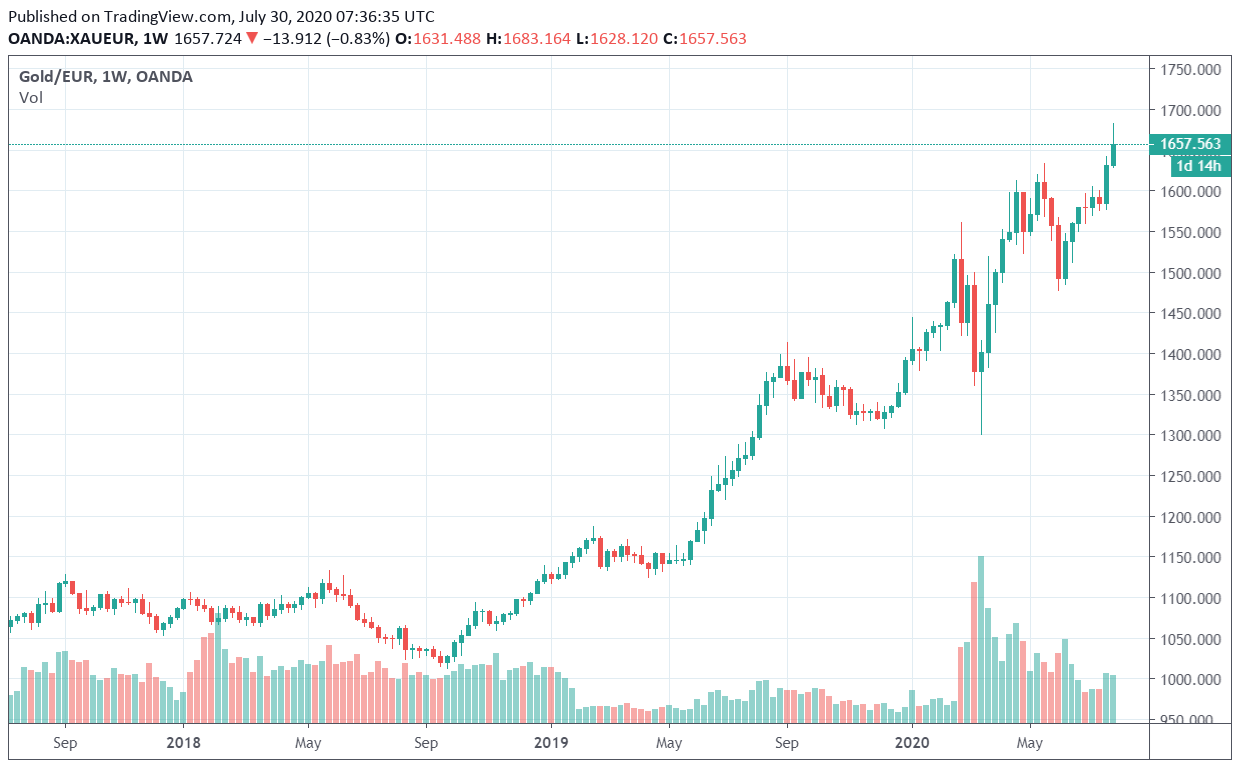 In the two-year chart, which shows monthly bars (each green or red bar represents the monthly price changes), you will see that the surge of the gold price started in October 2018, which was the time when the Fed became reckless with its quantitative easing policy (better known as money-printing in the old days).

It is also the month when the ECB further lowered its interest rate from minus 0.4% to minus 0.5% and when European banks figured out that the ECB’s negative interest rates will be equating to a 4% decline of their profits.

The gold price then remained undecided in February and March 2020, as everybody was yet trying to understand whether economic damages caused by COVID-19 will be of a more temporary occurrence or more of a lasting nature. The answer came in April when the gold price surged by 7.75%.

The political agenda provides additional reasons for continued and increasing demand in gold to preserve wealth.

US President Donald Trump plays an important role, but he is by far not the only reason.

The US-China relations and the decisions and actions of Mr Trump and the current US government are not the real reason for diminishing trust in global economies. The verbal duels of the two respective leaders, establishing threat scenarios and mutually closing consulates are only the result of a changing economic and political world order.

Consequently, the tone may change if Mr Trump is not re-elected in November, but the essentials will not change. The US is at the footstep of losing its position of being the largest world power.

Markets, analysts, and investors are already speculating about the consequences of a weakening US Dollar. They are naturally concerned about the future global political world map, new political and economic alliances, and balances.

On July 28, Goldman Sachs corrected its gold price forecast by adding a 20% increase, seeing the gold/USD price at $2,300 in mid-2021. The price of $2,000, previously expected to be reached in early 2021, will probably be reached within the next few weeks.

There may be psychologic and technical reasons for short-term price losses. For example, the price of gold dropped dramatically from 24 to 30 April, on 26 and 27 May and between 2 and 5 June. However, the price recovered rapidly after those drops.

The reason for the sudden price decreases was the fact that very large investors, typically pension funds and sovereign funds, needed sudden liquidity to avoid margin calls related to their other, leveraged investments.

It was then that the fundamental drivers explained before, pushed up the price to the level prior to the sudden price drops, and further caused the gold price to surge.

Stefan Nolte is the Director of Liemeta ME Ltd, a provider of physical storage of precious metals at its prime location in Liechtenstein as well as trade services of precious metals, mainly gold, silver, platinum and palladium.

Markets mixed as spotlight shines on US CPI