As the coronavirus is spreading across the world, its consequences on the economy are turning investors to safe-haven assets.

What started in January as a local issue in Wuhan, China is now a global problem.

Despite the uncertainty that remains around the health hazards of the virus, one thing is clear; its impact on the economy is tremendous.

Early on already, large segments of the Chinese economy came to a grinding halt with several supply chains collapsing as a result.

As the virus continues to spread, other major economies are suffering and experiencing the same fate as China.

Globally, schools and companies have been closing, events have been cancelled, travelling brought to a minimum, and working from home, where possible, is on the rise.

Some 23 members of the parliament in Iran have been infected, and one of Ayatollah Khamenei’s top advisers died of the virus.

The first case of corona in the EU institution was also confirmed.

The European Central Bank has called off meetings and the International Monetary Fund has changed its spring meetings to virtual ones, out of fear for contamination.

The World Health Organisation has now announced that “the mortality rate for COVID-19 (coronavirus) is 3.4%…, higher than previous estimates of 2%” (in Italy it is estimated at 3.8%).

Fear has shut down global economic activity and has seen investors panic and sell, wiping more than USD1 trillion off the value of businesses.

The virus may have a domino effect in the currently very brittle world economy.

Unconventional monetary policy has generated asset bubbles, zombie companies and banks, decreased productivity growth and global debt to GDP is at a historical high of 322%.

Worryingly, the first macroeconomic indicators from China are disastrous.

The Caixin Business Activity Index fell over 25 index points from 51.8 in January 26.5 in February. 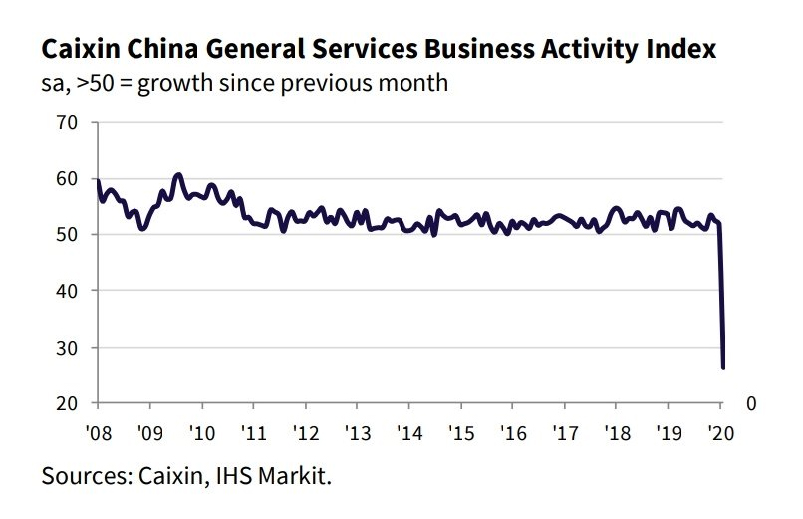 This has resulted in Chinese banks taking extraordinary measures in not recognising bad loans, with the explicit approval of regulators in Beijing; rolling over loans, relaxing guidelines on how to categorise overdue debt, allowing borrowers to skip interest payments for as long as six months.

The four biggest state-owned banks are currently trading at an average 0.5 times their estimated book value for this year, near a record low. European banks are seemingly in no better position.

There are now more than 90,000 coronavirus cases globally with over 3,000 deaths.

The IMF said the global spread had crushed hopes for stronger growth this year, while a Fed report showed there were signs the “epidemic” had begun to weigh on US business sentiment.

The US Fed and Bank of Canada have both responded by cutting interest rates by 50 basis points.

Markets in the eurozone are pricing in a 90% chance that the European Central Bank will cut the deposit rate during the next week.

Those fearing the worst will want to take refuge in so-called safe-haven assets that rise in value when stock markets tumble, such as Gold.

Gold has been a safe haven for thousands of years and offers the best protection when economies contract, stock markets plummet and banks fail.

It is the only financial asset that is no one’s liability.

Gold has no counterparty risk and cannot be printed.

Investors are currently in the process of running down Exeter’s inverse pyramid: selling stocks, buying government bonds, and to a certain extent, gold.

Gold is the hardcore of our international monetary system. ~ Exeter 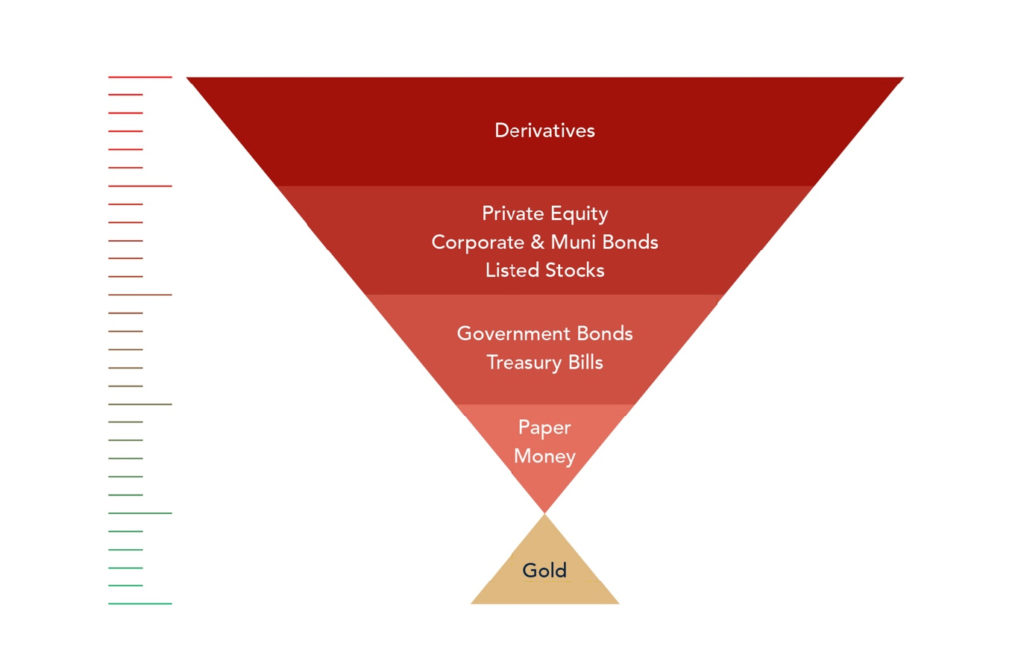 An essential element of capitalism is investing—directly, indirectly, through bonds or equity—that involves risk. The higher the risk, the higher the return.

The lower the risk, the lower the return. What falls outside of the investment realm has zero risk and no return but provides the base that carries the debt system.

This safe haven is gold, the only asset refuge that has no counterparty risk.

Gold prices have climbed 2% (8% since the start of the year) to a more than one-week high overnight as worries over the global spread of coronavirus continue to impact and spur more safe-haven flows.

The fundamentals are right for gold to push through the US$ 1,700 per ounce mark. 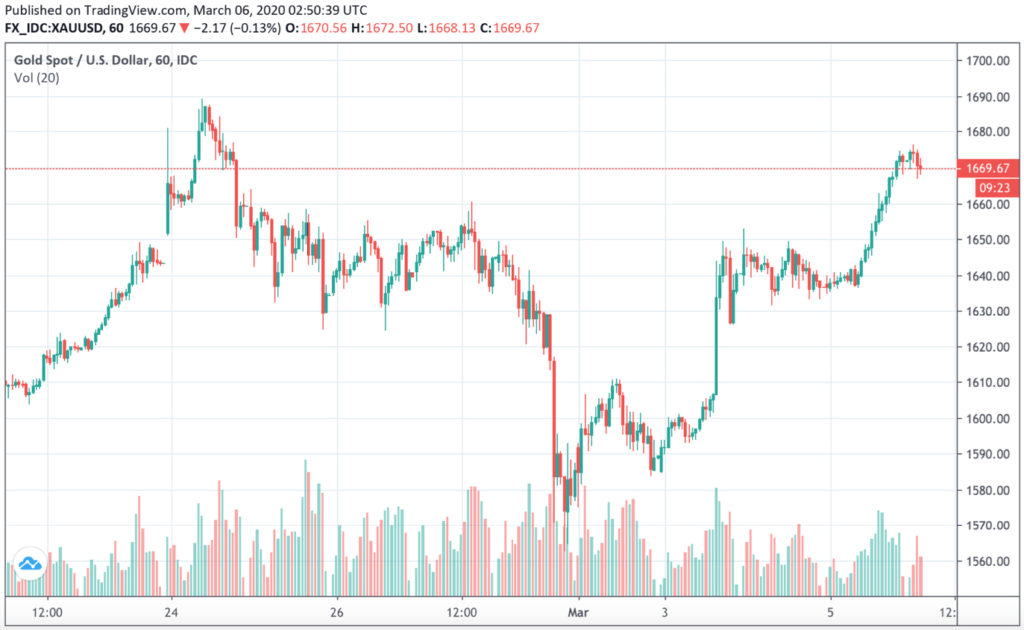 Although gold has a lot more upside, it is always and will remain a bumpy road.

However, it is important to protect your downside and a key lesson that should be remembered from the financial crisis: people need to protect their own future and wealth.

Other safe-haven assets include:

Investors like government bonds as they are unlikely to ever default meaning their value is normally reasonably secure.

Central banks in Europe, Britain, USA and Japan have however printed money and bought bonds, forcing the price of bonds up and their yields down.

The income received is thus often minuscule or nonexistent, making the risk of losing money greater than normal.

Although stock markets tend to be the first to sink during the panic, some “defensive” companies can hold their value.

These are usually businesses whose profits and performance are not affected by an uncertain economic environment and can, therefore, make money regardless.

Diageo and Unilever are classified as such companies, for example.

On the other hand, in the current environment, the coronavirus has even had an effect on such defensive companies as both companies have sales around the globe, including China.

They may therefore not be as immune as the virus may close its supply chain.

Selling out and holding cash means you are no longer exposed to the stock market risk.

It may give you the freedom to “buy the dips” but it may also mean you may miss the recovery in share prices.

The more cash you hold also means the higher the likeliness of loss of wealth during a bank crisis.

Ivanka Pittelkau is Precious Metals Consultant at Liemeta ME Ltd

COVID19: No deaths as cases beyond 500 again

Cyprus reported no coronavirus deaths on Sunday, as new daily

A Syrian man, 32, is suspected of killing two missing

Before the Pope could arrive to bless us with his

A Cyprus start-up company hopes to contribute to a food